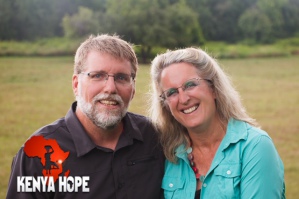 Dave and Joy Mueller were appointed to Kenya Hope in 2009 and serve as directors. Dave serves as operations director (primarily in Kenya) while Joy is executive director.

The Muellers began their missions career serving with New Tribes Mission in Papua New Guinea for fifteen years, and then were sent t0 build a hospital in Southern Sudan in 2008. After completing that, they were appointed by the board of Kenya Hope.

Dave and Joy have three sons, all married and living in the USA. Their sons have helped them a number of times with Kenya Hope projects, traveling to the Centers and getting involved with the people and the projects there. The Muellers have one grandson.